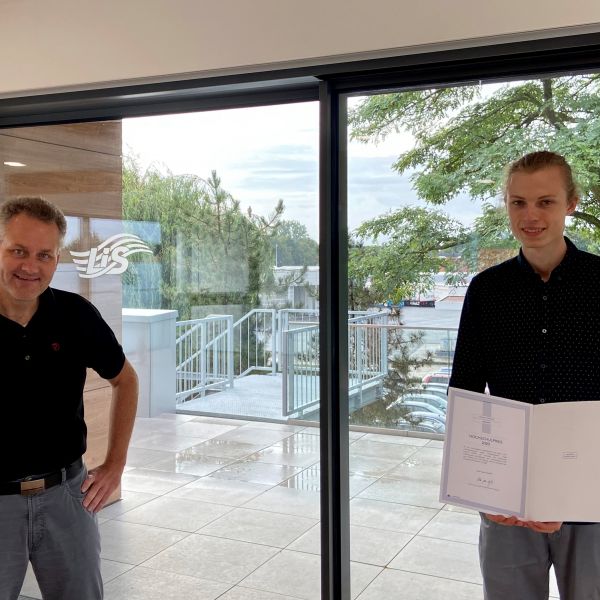 The Münster University of Applied Sciences has awarded Yannick Wölker the University Prize 2020.  The former dual student of LIS Logistische Informationssysteme AG had dealt with the maintenance of IT systems in his bachelor thesis. His aim was to find out the optimal point in time for cleaning up the servers on which the software producer hosts the transport management system WinSped. Wölker, who now is a permanent member of LIS, has recently been awarded for his outstanding performance.

“It is our claim to take the training of our future specialists into our own hands”, says Irina Tappe, personnel officer at LIS Logistische Informationssysteme AG. Yannick Wölker, formerly a dual student of computer science and IT specialist for application development, is now also permanently employed as a working student in the software development department of the Greven-based company. He has recently been awarded the University Prize 2020 of the Münster University of Applied Sciences. “The fact that yet another of our graduates has now been honoured confirms our efforts,” adds Tappe happily.

In his final thesis, the 23 year old looked for ways to make the maintenance of the WinSped servers more efficient. For this, he relied on so-called metaheuristics, i.e. special algorithms for the approximate solution of optimisation issues, which are inspired by phenomena in nature, for example the swarm intelligence of ants. By varying multiple parameters, the IT specialist developed a solution that shifts the process of cleaning up the servers to times when their utilisation is particularly low.

In August, his BA thesis was named the best final paper of the past year in the field of computer science. Thomas Roters, Head of Quality Management at LIS AG, who supervised the project as second assessor, is particularly pleased about this: “An impressive achievement, for which we congratulate Yannick Wölker warmly.